What are nuisance spiders?

Nuisance spiders are those species that don't possess venom harmful enough to cause health concerns in people. While each of these spiders can bite, they are generally not considered dangerous to humans whose dwellings they share. House spiders vary wildly in size and appearance. Some of the most common nuisance spiders in the United States are American house spiders, cellar spiders, jumping spiders, and wolf spiders. 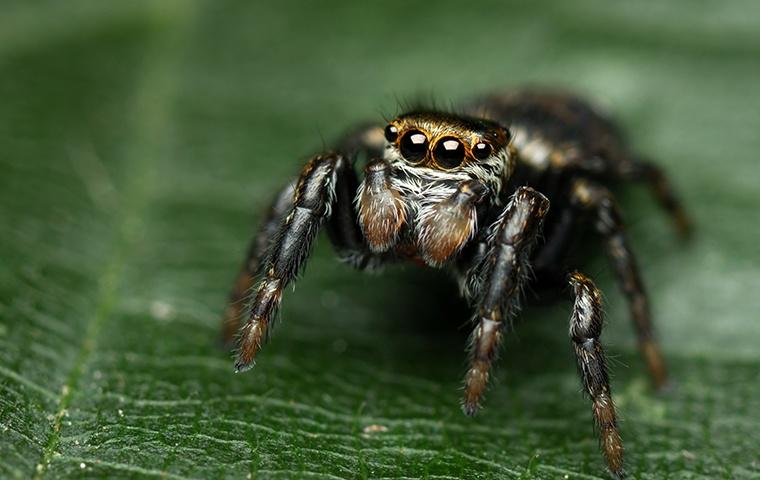 This species grows to 3/16-5/16 inch in length. It has yellowish-brown coloration with distinctive dark, chevron markings and white, rounded abdomens. This is the most common species found throughout North America. They create messy webs that look unsightly in comparison to the regimented webs created by other species.

These spiders range from 1/16-3/8 inches in length with brown-beige coloration. They have small, round bodies and long, skinny legs. As their name suggests, these spiders are most commonly found in cellars or other dark spaces such as crawlspaces or garages.

Jumping spiders are typically black, ranging from 1/8-3/4 inch long. Unlike many household insects, jumping spiders are primarily active during the daytime and can often be seen along windows, walls, and screen doors.

This species is larger than most household spiders. Wolf spiders are brown to black in coloration with elongated bodies and hairy legs. Male wolf spiders grow from 1/4-3/4 inches long, while females grow from 3/8 inch to over an inch long. Wolf spiders are known to be very skilled hunters, preying on other insects within the home.

However, while they are not directly harmful, they can still be a nuisance and create headaches for home or business owners. While their bites may not be directly harmful, certain spiders (namely wolf spiders) have bites that will cause an allergic reaction in some people.

Why do I have a nuisance spider problem?

House spiders invade homes in search of a warm place to overwinter that provides no shortage of prey. This can often happen during colder months of the year when outside resources become scarce, pushing other pests inside homes. Unfortunately, this means that the homes most at risk of spider infestations are those already suffering an infestation from something else. The most common indicator of a spider infestation is the presence of spider webs throughout the house, though seeing live spiders is not uncommon. House spider webs are often found in corners of ceilings, closets, attics, and basements.

How do I get rid of nuisance spiders?

While spiders serve a vital function in nature, they make much better neighbors than roommates. Unfortunately, their ability to crawl into the small nooks and crannies throughout your home makes them a difficult pest to eliminate on your own. If you’ve started seeing webs popping up around your home, don’t hesitate to call the professionals at Pestmaster® Services today for help with spider control services.